Get ready for the challenges of winter driving

Van operators need to remind their drivers of the increased dangers of winter driving, according to The Fuelcard People. The company points to the release of a joint publication from the Department of Transport and the National Office for Statistics – ‘Modelling the impact of the weather on road casualty statistics’ – which evaluated monthly road accident statistics between January 1991 and December 2014.

The casualties were grouped by fatalities, seriously injured and slightly injured. These were further classified as car occupants, motorcycle users, cyclists and pedestrians. Van drivers were not treated separately. Altogether, these amounted to 94% of all road accident casualties during the 14 year period. The DfT and ONS used Met Office data to map the monthly casualties against rainfall and temperature figures during the same timeframe.

The analysis showed that slight injuries for motorists rose with higher rainfall for every month of the year. It also showed that above average rain, sleet and snow was accompanied by higher numbers of serious injuries during six months of the year. One apparent anomaly: that fewer cyclists are killed during colder than average winter months, could be due to fewer people cycling when the weather is particularly cold.

Steve Clarke, Group Marketing Manager, comments: “This long and complex report has confirmed that colder winter weather and higher than average rainfall means more serious accidents. As winter approaches, van and other LCV users must accept not just that their drivers are more likely to be involved in accidents, but that the consequences are also likely to be more serious. This increases the duty of care liability on managers. If a post-accident investigation shows that a van driver has not been advised of the need for greater care during winter, it could be argued that their manager has neglected duty of care obligations.” 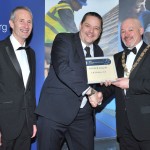