While the UK domestic gas boiler market has remained steady in recent years, the latest statistics revealed by BSRIA’s World Market Intelligence Division has revealed dramatic growth in China. Driven by environmental policies and a shift from the use of coal to gas, China is now by far the world’s largest gas boiler market, with 4.6 million units sold in 2017. The Chinese market is dominated by wall mounted non-condensing gas boilers, accounting for 90% of sales.

Despite South Korea recording a moderate decline last year, it remains the second largest market with just under 1.7 million boilers sold. With an 86% share, wall-mounted boilers also accounted for the majority of the market, of which 57% are non-condensing units.

The UK recorded sales of 1.6 million units in 2017, remaining in third position in the list of world markets. With over 26 million boilers installed, there is a large replacement market of which almost 100% of units sold are condensing boilers.

The other countries to record markets of over one million domestic units were Turkey and Russia, while the North American market remains a relatively low consumer of domestic boilers with around 400,000 units sold per annum.

In the commercial boiler market China is again the largest market with just over 109,100 units sold in 2017, with the North American (55,500) market being the second and Turkey (50,100) the third largest market. 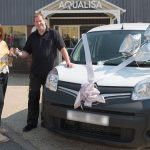