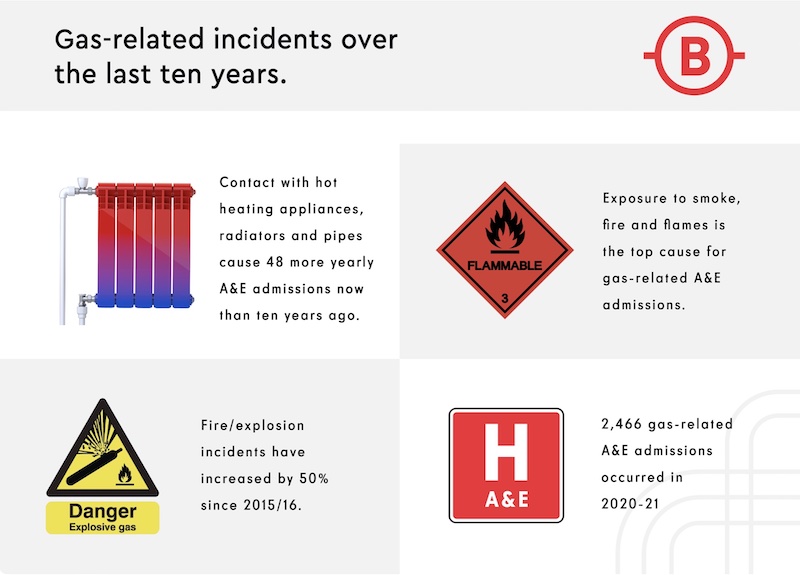 New research has revealed that there have been nearly 30,000 gas-related A&E admissions over the past decade.

The team at Bensons Gas Engineering analysed NHS Digital reports from 2010-11 to 2020-21 to find out the most common causes of gas-related incidents and identify any changes over the years. The findings revealed that 2466 gas-related A&E admissions occurred in 2020-21, and a staggering 29,275 took place over the last ten years.

There has also been a 50% increase in flammable gas fire and explosion incidents reported to HSE since 2015/16 and a rise in yearly fatalities from one to eight over the five-year timeframe.

Contact with hot heating appliances, radiators and pipes caused the second-highest A&E trips in ten years, of 9425. It’s also the only external cause that has increased in admissions, with 48 more occurring in 2020/21 than in 2010/11.

The third biggest gas-related cause, with 8191 A&E admissions over ten years, was accidental poisoning by and exposure to “other gases and vapours”. However, contact with hot air and gases came in fifth, resulting in 534 admissions in the decade of analysed reports.

The cause cited as “other exposure, e.g. to unburnt gas” by HSE hasn’t caused fatalities during this timeframe, according to the report. However, the overall incidents related to this cause has increased by 115.38%.

Dale Goodman, manager at Bensons Gas Engineering, says: “This large number of gas-related accidents and emergencies is extremely worrying, especially as these types of incidents are often avoidable. Many of these gas-related causes of A&E admissions can be triggered by a gas leak, which you can prevent with regular professional maintenance and servicing of gas appliances.

“Neglecting the gas safety of a property can have catastrophic consequences as faulty gas appliances can lead to carbon monoxide poisoning, fires, and even explosions. Arranging for this yearly safety check is a quick and straightforward task that could be life-saving.

“As well as implementing safety measures to prevent these types of incidents, and having thorough planned preventative maintenance schedules in place, it’s also essential to prepare for the worst-case scenario, as some accidents are unforeseeable. Everybody should be clued up on the potential signs of a gas or carbon monoxide leak so that you can address it quickly and stop it from escalating into a life-threatening situation.” 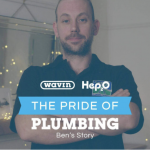 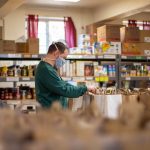