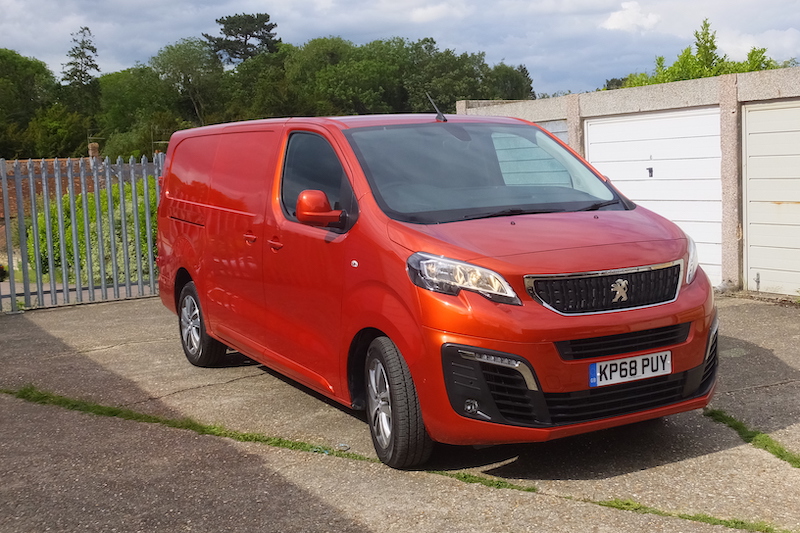 Building on the success of the previous generation, Peugeot redesigned the Expert van to deliver a better driving experience with plenty of perks incorporated into the base model. Mike Smyre tested the Expert Asphalt Long model, with favourable results. 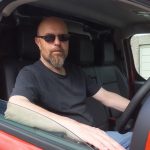 The Expert comes in compact, standard or long bodies (all with a single roof height) with a choice of two engine sizes and five power outputs ranging from 94 to 178 bhp. Gearboxes range from a five-speed manual on the 94 bhp model, through to an eight-speed auto with steering wheel paddle shift as standard on the 178 bhp. There are four levels of specification: the ‘S’; the Grip – an ‘S’ with more ground clearance and an engine protection plate for site work; the Professional; and the Asphalt (previously called the Professional Plus). Our test model was the Asphalt Long with the 2.0 litre 148 bhp engine and six-speed manual gearbox.

Even the basic ‘S’ comes with a decent spec, which includes Bluetooth, DAB radio and cruise control/speed limiter. The Professional adds A/C, a 7in touch screen for radio and connectivity, rear parking sensors and electrically folding heated door mirrors among others. The Asphalt package further adds metallic paint, colour coded bumpers, 17in alloy wheels, front and rear parking sensors and the rear parking camera. Everything in the pictures comes standard at this trim level, except the two-tone alloys which add £100.

The Expert also shares its platform with the Peugeot 308 and Citroën C4 Picasso, which shows up in the cab in both positive and negative aspects – mostly positive, so let’s get the niggles out of the way first. The seating is trying hard to accommodate three but not quite making it, and while technically it’s a walk-through cabin the space between the gearstick and the middle seat is too small even for my skinny shins. Storage space within the cab is also somewhat limited compared to larger vans, although Peugeot have made clever use of the space available. There are large bins on each door, storage under the passenger seat, another bin on the dash and a couple of decent-sized glove boxes. 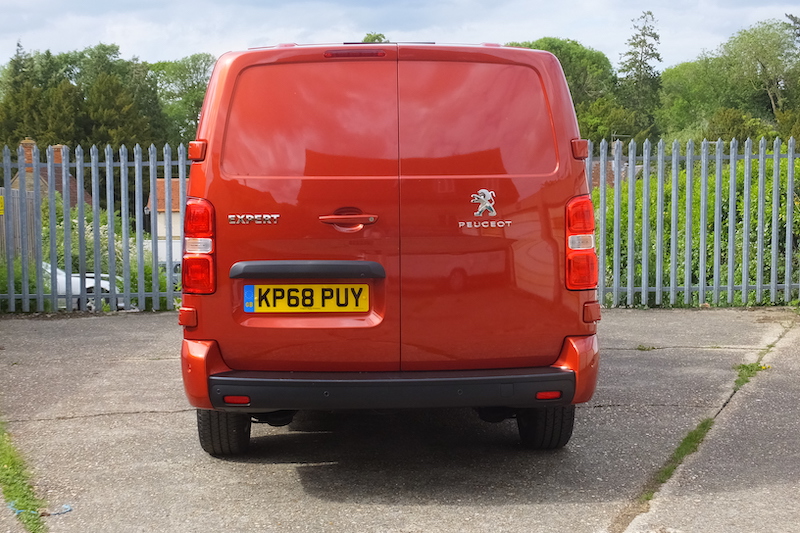 The upside is a van that drives like, and is equipped like, an MPV. The media centre incorporates digital radio, satnav, phone connectivity and a settings menu, and turns in to a reversing camera when reverse gear is selected. This has the neat trick of also displaying a bird’s eye view of the van as if there was a camera about ten meters above you. What wizardry is this?

The whole set-up is extremely instinctive, and I didn’t once have to refer to the user’s manual to navigate my way around. The steering column controls are similarly easy to work out, which is a good thing as visually they hide themselves behind the arms of the steering wheel. While this takes a day or two to get used to, you quickly appreciate the great ergonomics and the quality feel of all the switchgear.

The seats (well, two of them at least) are comfortable with plenty of adjustment and provide good support over long journeys. The third seat folds up to provide a table for maps or paperwork; this is probably a better use for it as the gear change column is exactly where a second passenger’s leg would want to be and the van simply isn’t wide enough for three hefty blokes to be comfortable over any distance. 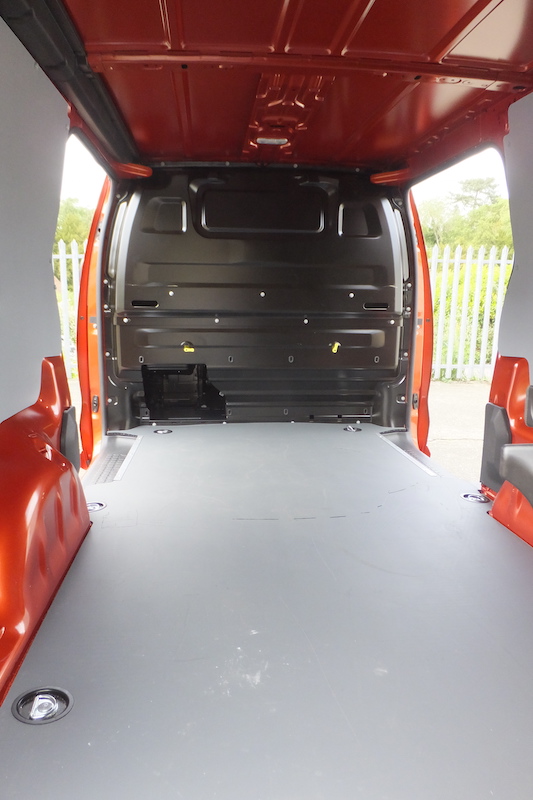 The lack of spaciousness in the cab is not reflected in the load area. There is space for three Euro pallets and easy access from the sliding doors, which come both sides as standard. The floor is long enough to accommodate 3m pipes thanks to the removable hatch underneath the passenger seats. The 50/50 split rear doors open 180 degrees on a simple-to-operate latch, but here we find the only bit of bad design in an otherwise very well thought-out vehicle. Once the doors are open past 90 degrees they are, quite literally, left flapping in the wind.

On the road the MPV heritage again comes into its own. The 148 bhp engine has plenty of grunt, and gives a very respectable 0-62 time of 11 seconds.  The steering is nicely weighted if slightly lacking in feedback and the Expert takes twisty roads in its stride, with minimal roll. The six-speed box is slick and precise and the clutch is light and progressive. The brakes also feel just right and haul the van down rapidly in an entirely predictable manner. I didn’t get the chance to drive the Expert fully loaded, but the brakes and suspension give the impression of being more than capable of handling the van’s 1311kg load capacity. Wind and tyre noise are minimal and the engine only intrudes when you are pushing it hard. While there’s not a lot of noise from behind, I would consider the optional insulated bulkhead, as apart from making life quieter it allows the driver’s seat to recline a couple of inches further when the coffee break alert tells you it’s time for a quick nap.

Manoeuvring in tight spaces is made easy by the reversing cameras and front and rear sensors and a very respectable 12.4m turning circle. The single vision mirrors are adequate, although I don’t think I’d be happy relying on those alone. 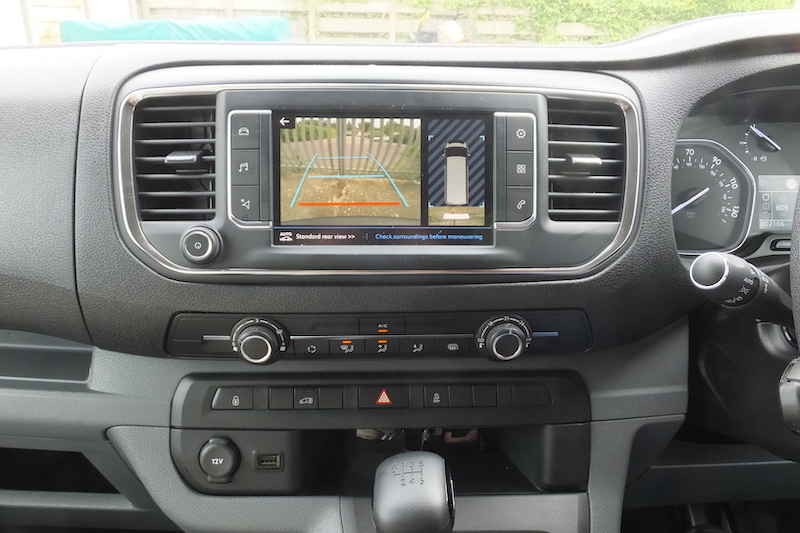 As well as MPV technology and drivability, you also get all the safety features you’d expect from a modern mid-range car, and if you want to delve into the extras catalogue there is an impressive range of safety technology, some of which is not yet available in the car range. You can specify Lane Departure Warning, Blind Spot Monitoring and even a camera that reads road speed signs and alerts the driver to set the speed limiter appropriately. Physical safety is taken care of by the 5-star Euro NCAP rating (conducted on the Traveller version in 2015) which is quite an achievement considering this is one of the lightest vans in the mid-panel class.

The 1446 kg kerb weight also contributes to the class-leading economy figures. Testing a vehicle involves rather more, shall we say, spirited driving than daily use and I was not able to match the official 53.3 mpg (combined cycle) figure, but the 44mpg I did achieve is still impressive in the circumstances. This was helped by the stop-start feature that is so unobtrusive I had to keep checking to make sure it was working.

Peugeot have made massive improvements over the second generation incarnation of the Expert. This is a well-spec’d van, packed with safety features, fun to drive, competitively priced and economical to run. If you’re not looking for massive load capacity and only carry one passenger on a regular basis, it’s definitely worth a closer look. 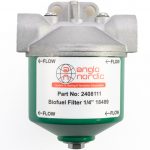 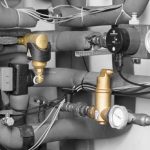